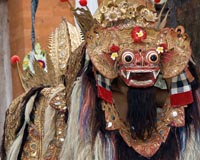 From a Barong dance in Bali

Perhaps because of my background in spirituality, I see the religion as holding an important place in the shared unconscious processes of a society. In the UK this could be seen as questionable, now that church attendance has become very low, but one of the things that fascinates me in my time in South East Asia is how different things feel because the religion sits in a different place. My sense is that, as with much of Europe, the influence of Christendom on contemporary Britain seems small only because it is complex and deeply familiar.

For me this is more-or-less the opposite of what I have seen in Bali, where Baliniese Hinduism accounts for around 97% of the population. It's stretching it to suggest that the one island has just one religious group corresponding to one ethnic group, but it is closer to that than anything I have experienced in the West. This means people are not used to talking about their religion in a way that uses it to mark out how they differ from other groups. Instead it is so deeply familiar that many struggle to describe it — I’ve heard this likened to “asking a fish to tell you about water”. What goes with that is a remarkable facility to be with a lack of understanding, because understanding the details is secondary. An example might be a visit I made to a gallery near Ubud where one of the artists showed me round. He could talk about his own work, but when I asked about a painting by one of his colleagues, he replied vaguely “it’s something out of the Mahabharata”. He seemed happy to recognise that this was of a scene from that Hindu epic, but comfortable in his not knowing more. 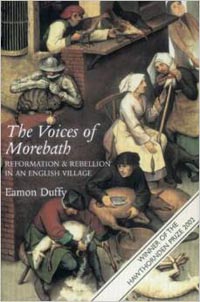 There was a time when Europe was similar. Eamon Duffy's Voices of Morebath gives a super account of that world in a rural Devonshire village in the sixteenth century — though as that book is telling the story of that parish as it changed during the Reformation, it's also talking about the early stages of the process of change that have led Western religion to where it is today.

There is a parallel between that way of being and the realm of negative capability, as if we in the west have become so adept at treating with certainty and knowledge that we need to invent a “new” language to talk of the unknowing this artist has at his fingertips.

By contrast the Christendom of the UK sits in a strange place. It is woven through the fabric of British society, yet it has become almost normal for people to need to distance themselves from it. Within Christianity there has been a shift since the renaissance, which accelerated at the enlightenment, into a realm where religion is equated with certainty. There is a rich mystical tradition which encompass The cloud of unknowing, Julian of Norwich, John Calvin and stretches through to contemporary figures like Thomas Merton, yet in the public discourse this is widely ignored and the place of the mystic found by borrowing from the East.

Jung talks in terms of the technological success of the West being achieved at the expense of the feeling function, and there is a sense that this has been marginalised from much of Christianity, at least as it is described in the public discourse

Jung also observes that our unconscious processes of often complement the conscious ones. So with feeling marginalised in the public discourse, the desire for it sits in the unconscious, expressed for many today in a groping to the religions of the East and new age spiritualities. The danger is that this short-changes both Eastern and Western religion. I am reminded of a conversation with a theologian talking about what Christianity has to learn from Buddhism: what he was describing sounded remarkably like Julian of Norwich, and my sense was that what he was seeing in Buddhism was actually the English mystical tradition: he was seeing in Buddhism a reflection of part of his own religion which he was struggling to own. I could describe that as him finding the unconscious content he was struggling to own by projecting it onto Buddhism. 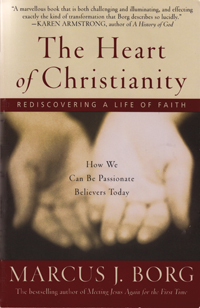 There might be a link with what Marcus Borg calls the old paradigm in his book “The heart of Christianity” — something rooted in the concrete thinking that has gone with our technological advance, in contrast with the more fluid new paradigm he sees emerging in contemporary Christianity. That sounds like something new, though it seems fairer to describe it as a recovering of something we had list. Attitudes to the creation story might be a good example of this. There was a time when the biblical creation stories, like those of ancient peoples across the world, made sense: the idea of the world being created in seven days made sense to people who needed a myth to hold the sense of our createdness. But with the rise in more scientific — less feeling — thinking, that gardually morphed into something concrete. The Irish bishop James Ussher (1581–1656) was the first to manage the extraordinary feat of totting up the numbers in the Bible, and concluding that the world was created at the nightfall preceeding 23 October 2004BC. Even trying to do that would have struck a Mediæval Christian as weird. The upshot was massive conflict when scientific evidence emerged which told a very different story of the history of the earth. Those who hung (or hang) on to the idea of creation in seven days have lost the awe at creation which the story once held. In what Borg calls the “new paradigm” people begin to reconnect with the mystic by letting the stories once again become myths — things which hold a deeper truth than the truthfulness (or otherwise) of their words.

In the middle of this, some of the fashionable spiritualities of today start to look interesting. I hear westerners talking of mindfulness and meditation in ways that seem amazingly complicated — as if the task has to be made complicated to seem worth the effort. It can end up in a strange parody of Eastern practices — at the same time as people in the East have turned so much to the west for other things. An example might be the Zen koan (phrase) “imagine the sound of one-hand clapping”. Koans have a role in meditative practice, around non-duality and moving deeper into pure consciousness, and are not supposed to have a clear meaning (which makes them hard to talk about) and engaging with them touches a space outside language, yet I've heard Westerners proudly announce that the “answer” to this koan is “silence”, as if being with outside the place of certainty is too much to bear.

It seems as though being with myth and unknowing is hard for many people, except, perhaps, when it becomes the resource prized as “creativity” (provided that the creativity is kept under control). This is where the language of spirituality starts to become useful — if it can steer between collapsing into the limiting certainties of rigid religion or anti-religion. It is a tricky space because if offers the resources of that complement certainty, but which people often seem to need to think they don't need. From a rather different starting point, Bion explores this in terms of what he calls “O”, standing for “otherness” or “ulimate reality, which can't be known, but can be glimpsed in parts as things emerge from this into what can be known. This is a rich place to begin an exploration of creativity.