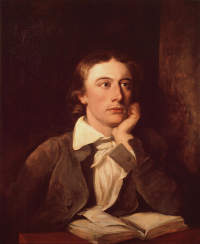 The term “negative capability” was coined by Keats in a letter to his brothers George and Thomas:

“I had not a dispute but a disquisition with Dilke, upon various subjects; several things dove-tailed in my mind, and at once it struck me what quality went to form a Man of Achievement, especially in Literature, and which Shakespeare possessed so enormously — I mean Negative Capability, that is, when a man is capable of being in uncertainties, mysteries, doubts, without any irritable reaching after fact and reason — Coleridge, for instance, would let go by a fine isolated verisimilitude caught from the Penetralium of mystery, from being incapable of remaining content with half-knowledge. This pursued through volumes would perhaps take us no further than this, that with a great poet the sense of Beauty overcomes every other consideration, or rather obliterates all consideration.”

The timing is interesting. I’ve little doubt that what Keats describes would be recognised by most creative people down the generations, not least as a healthy counterbalance to being so full of ego that the creative process is undermined. My guess is that the language would have seemed strange for earlier generations: someone like J.S.Bach seems to work out of that space, but to talk of his work on craftsman-like terms as though anyone could write with his skill given enough application. What that actually does is to define define precisely the aspects of the creative’s work that can be defined — like the rules of counterpoint — and holds a space for what can’t be expressed in those terms by not trying to express them. What stands out from Bach’s music is not his technical skill, but the artists and sense of the transcendent that is built on the technical foundations. It’s no coincidence that many of his manuscripts are headed with the letters “SDG” for “Soli deo Gloria” (let the glory be only to God): a clear indication that his art points beyond itself.

Freud’s ground-breaking work in psychoanalysis was around the treatment of what presented as illness, and there’s been a gradual move in psychoanalysis away from a medical model to something which is more about learning, or mobilising the resources of the unconscious.

Jung offers some pointers in the idea of the unconscious holding the complement of what is in conscious processes, which cracks open the idea that, while I am conscious of having knowledge and capabilities, there might be something in my unconscious that complements it and allows my unknowing and inability to be potential resources.

Bion takes this further in his idea of “O”. He uses letters to represent various things, and O (for “otherness”) refers to ultimate reality — to what you can’t fully grasp, but is territory of which it is possible to get glimpses as things emerge into knowing. There’s an obvious parallel between that and the way some mystics speak of the unknowability of God. My own sense is that there are strong parallels between O and a mystic understanding of God, but Bion prudently ducks the raft of things projected onto the word “God” by avoiding it. Critically, that is the polar opposite of religious certainty.

In the link between negative capability and spirituality, I find it helpful to have to distinguish between this and religious certainty which is so saturated with “knowledge” that there is no room for unknowing. At its worst, that is what gets religion a bad name. Scratching the surface only slightly, my sense is that religious certainty is a giant defence against anything radically “other” — as if the function of religion is to keep God at a safe-enough distance. It collides with all sorts of power games in the name of religion, whether that is creationists fearful of discovering that the world is more complex than they thought, or biblical fundamentalists struggling with the possibility of there being any reading of scripture other than their own (which is also a struggle with there being anything living in the encounter with scripture that might not fit their expectations).

It is possible to replace one set of certainties with another — the classic one is to replace religious certainty with scientific certainty. That’s beloved of people who have been hurt by religion and need to rubbish it, but “scientific certainty” is as unscientific as “religious certainty” is anti-religious. Most of the scientists I know seem to spend most of their time on the edge of unknowing: there is plenty of knowledge and technique behind them, but the focus of their enquiry is beyond that, into the unknown.

Instead of that, the invitation of negative capability is to be with unknowing and let it lead somewhere. For some that mobilises intense anxiety, as if going somewhere new is deeply fearful. That might feel like a reason not to go there, but the bigger question is what that fear invites them to integrate. The place of incapacity and of unknowing can be intensely rich and creative, both in terms of actual invention — whether of objects or ideas — or of groups and organisations finding ways to evolve and be enriched by adapting to new situations.

There is a good parallel this and psychoanalysis, where the good analyst doesn’t “know better” and sit in a position of superiority, but instead mobilises their capacity for unknowing, to enable the analysand to explore the riches of their unknown — unconscious — being.