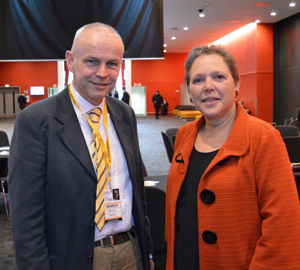 The current sticking point for the Bardon bypass is that it will cross the railway line, for which Network Rail are entitled to charge a license fee, likely to be in the region of several million. In the meeting, Mark Argent put the case for central government to waive this, which would make the bypass much more financially viable.

The planned bypass will run from the Birch Tree roundabout on the A511 to the end of Stephenson way, alleviating heavy traffic now, which will get worse when the Bardon Grange development of around 3000 homes is complete.

Mark Argent said, “Local people in Bardon and the surrounding area have made it clear to me and Cllr Wyatt who for many years has campaigned for the Bardon By-Pass that the by-pass is desperately needed to help address the traffic problems faced by many residents in the local area. People are already avoiding this stretch of road by going through Hugglescote and along Grange Rd, which is putting pressure on the Hugglescote crossroads.”

“At present the Leicestershire County Council are in consultation about altering that junction to improve traffic flow, and options include the full or partial demolition of the Hugglescote Community Centre which stands at that crossroads. Even if the centre is saved now, its future can’t be guaranteed if traffic levels rise. In a town already in need of regeneration, the loss of a community centre would be a serious step backwards, that’s why I decided to put forward a case to the Transport Minister so we can overcome the sticking point of Network rail charging a fee which is clearly making it economically and financially very costly.”

The case Mark Argent put to Susan Kramer is that building the bypass both helps with present and future congestion on the A511, and protects the Hugglescote Community Centre by reducing the traffic on that stretch of road. Susan Kramer has assured Mark that she will pass this on to the appropriate person in the Ministry of Transport so they can look into the issue in greater detail.

Liberal Democrat County Councillor Michael Wyatt ward member for the Bardon area said, “I am absolutely delighted that Mark has been able to speak to a Senior Transport Minister concerning the Bardon By-Pass. This issue must be resolved so the residents of Bardon can finally have their By-Pass which as been promised for over three decades.”