Recently I spent an interesting afternoon canvassing to support two Liberal Democrat candidates who are standing in the District Council elections: Vivenne Brooks in Ashby and then Angela Windram in Hugglescote.

Hugglescote is a village on the southern edge of Coalville. It’s been on my radar for a while because Leicestershire County Council have been consulting about a road-widening where one option involves demolishing the community centre. Elsewhere, I have written about the fact that this feels like a backwards step in terms of community development and the real answer seems to be to alleviate traffic by building the Bardon bypass.

With that in mind, it was fascinating to talk with a life-long Labour supporter who has lived in the village all his life, and remembers the building that is now the community centre from his childhood, when it was the infants’ school. Knocking it down and building something new somewhere else (if the money is made available) would lose that connection with people’s roots. 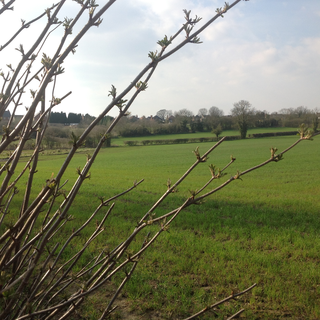 Site for some new houses

My ear was also bent a fair number of times by people worried about the proposed new homes. On a stile into what is now green land I saw a notice from David Wilson Homes telling people to collect their dog mess: a reminder that development is envisaged.

The big picture nationally is that we have a housing shortage. People sometimes blame that on immigrants (forgetting that it is eased by emigration), but the background is that we have not been building enough houses for some while, and housing is under pressure from the increase in one-person households and from people living longer but choosing to remain in the homes where their family once lived (there is a good explanation of this on the Parliament web site). That is why Liberal Democrats nationally are committed to building an additional 300,000 homes a year. That is in balance with people’s understandable desire not to have new houses in what was the green land on their doorstep. Part of the balancing act on that in North West Leicestershire has been for Liberal Democrats to push for “green wedges” between existing settlements, so that new housing does not remove all green space.

Another layer to this is the need to ensure that new housing has adequate infrastructure — schools, doctors surgeries, community facilities and the like. I can understand developers being keen to maximise their profits, which is why infrastructure provision is often a complex part of planning discussions, but am concerned that the new planning rules pushed for by the Conservatives in the last parliament can make that process harder.

A little later, my canvassing on one road was book-ended by two lovely experiences. I was unmistakably LibDem, with rosette, clip board and bag (all courtesy of Liberal Democrat Image). As I got out of my car, someone came out of the home, smiled and asked “Are you the man?”... It turned out that she had emailed me recently about a “Vote for Bob” campaign in support of green issues. I’d written back outlining some of my support in principle, me which chimes in with the Liberal Democrat’s proposed Five Green Laws, though also explained that I am being a bit careful about actually signing up to things — in this instance the green agenda is really important, but I need to keep a little room for manoeuvre so that I can pursue it through the complexities of parliament. This is not a polite way of ignoring something, but is a way to keep some room for the compromises that are sometimes needed to get things to move forward. I receive lots of emails campaigning for different things and it is nice to know that people appreciate getting a reply.

The last door I knocked on was opened by a life-long Liberal Democrat supporter, whose warmth quite made up for the aggression of some UKIP supporters earlier.

Driving through Coalville a little later — as in Ashby earlier — I found myself on streets where I have knocked on every door. The succession of faces and stories coming to mind is quite a snapshot of where we are today, in all its diversity.