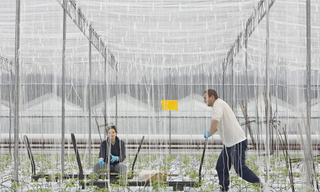 Migrant workers tending to tomatoes at the Baarda Nursery near Hull.

On the doorsteps I have had a fascinating range of conversations about immigration. I’ve sometimes wished I could get all the people I have spoken with together to hear each other’s views because hearing the diversity along the same street might strike a stronger chord than pulling them together into a “politician’s answer”.

I’ve heard people say we have too many immigrants. I’ve heard others say we need immigrants to plug skills shortages and compensate for the fact that we have an ageing population. I’ve heard people worried about immigrants claiming benefits, and others pointing out that, overall, immigrants put far more money into the system by paying taxes than they take out in benefits. I’ve heard some talk of unskilled immigrants, and others worry about the ethics of another country paying for someone’s education and them migrating to the UK — which is a diplomatic way of saying people are coming to the UK and bringing skills with them in which we have not had to invest.

But part of listening on the doorstep is to listen to the whole of what a person is saying. Many times people talk negatively about immigration and in the same conversation are worried about lack of housing, or housing prices, or their (or their children’s) struggle to find work, or work that is adequately paid. Yet immigrants are a tiny proportion of the population in North West Leicestershire, where the population is 98.8% white. I’ve heard suggestions that a fear of immigration is highest in the countries with the fewest immigrants, and seen evidence from the Centre for Research and Analysis of Migration that the fear of immigrants taking jobs and depressing wages is real, particularly among people who are already suffering economically, but there’s little evidence of this in reality. In fact there is ample evidence of fear of being “swamped” by immigrants being around in the past at times when the actual numbers were tiny.

It feels as if we are blaming immigrants for the problems we have with housing and work, when the real issue is that housing is too expensive and many of us are struggling for adequately-paid work. Action on immigration wouldn’t actually solve the problem. In fact a recent study suggested that immigrants from the EU contributed £20Bn in taxes to the UK economy in the period 2000-2011, so losing those people would make things worse.

A few weeks back there was a media storm when figures came out saying that 285,000 people had migrated into the UK in 2014, which flew in the face of David Cameron’s claim to reduce immigration to “tens of thousands” in the TV debates in 2010. In the same week, the Nursing Times ran a piece saying that, between them, three quarters of NHS trusts had recruited 6000 nurses outside the UK in 2014, and The Guardian has recently run an article saying that a quarter of nurses and midwives are recruited abroad because of difficulty finding people in the UK. That might be a long-term argument for more training, but right now it means the NHS needs immigrants if we expect to be treated when we are ill.

Taking a personal example, last summer I had a minor finger operation at Leicester General Hospital. The surgeon who performed the operation, and the registrar who assessed me, and the anaesthetist were not caucasian. They did a super job. If they hadn’t been there, how much longer would I have waited?

The free movement of people was one of the fundamental ideas in the Single European Act that created the single market. The logic was that free trade means economic activity moves, so it is vital that people are free to go where the work is. A single market means that has to be possible between as well as within countries. But it has produced fears. A few years back I remember scare stories about how we were about to be flooded with hundreds of thousands of Bulgarian immigrants. What caught rather less publicity later was that, in the three months after immigration restrictions were lifted, the number of Bulgarians employed in the UK went down by 4000. The issue was our fear and not the reality.

For parts of the country with a tiny proportion of ethnic minorities, the “foreigners” can seem threatening and a recent study showed the fear of imigrants is greatest where the actual numbers are lowest. At a personal level, my life is greatly enriched by friends whose families come from elsewhere. Something that is hard to measure is how far our economy is enriched by that — by the family ties that create economic opportunity. At the moment we are probably undermining our prospects by making it hard for people who come and study here to then stay on and work &151; if a student’s last brush with British immigration leaves a nasty taste in the mouth it makes it less likely that they in business later in their careers will want to build on positive experiences as a student and trade with the UK.

One of the ironies is that freedom of movement means that two million UK nationals currently live elsewhere in the EU. If we left the EU, these people would presumably have to return to the UK, placing a far greater strain on services than is usually attributed to immigrants.

The real problem is lack of investment in housing and lack of opportunities. The stories I am hearing on the doorsteps are painting a grim picture of austerity biting and economic growth being uneven and insecure. Attacking immigrants won’t solve the problem because they are not its cause. The cuts the Tories are talking about threaten to make this a whole lot worse. It’s adding to need to have Liberal Democrat influence in government after May to protect us from these excesses, and stop them fuelling a zenophobic rejection of the immigrants who are helping our economy.

Along the way, demonising immigrants risks undermining the multi-culturalism which is one of Britain’s strengths.

It’s clear that people’s anxieties are real, and there needs to be adequate control of immigration. Under Labour there were stong words, but we didn’t have adequate recording of who left the country. There are issues around the exploitation of people who come here illegally and are at the mercy of people operating outside the law. There’s a need for the system to be fair — and be based on what the country needs, rather than just on fears and perceptions. There’s a need to rebuild trust in the immigration system as well as to address the fears people unfailly lay on immigrants. For more on LibDem immigration policy see: www.libdems.org.uk/immigration.