Politics:: articles from 2015 General Election Campaign
On the doorsteps in Coalville and Ashby 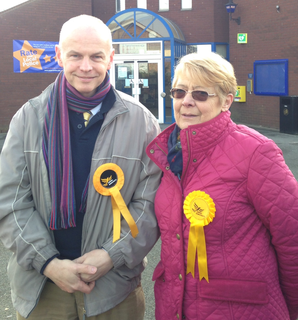 I’ve had some super experiences this week knocking on doors in Coalville and Ashby. That’s more about listening than persuading people. My own feeling is that trying to persuade people is rarely a good idea — if someone has strong party loyalties they are unlikely to welcome me trying to change their mind, and if they are still thinking about it, especially this far from the election, it seems important to respect their process. On the other hand, what we can do on the doorstep is to listen in order to get a better sense of what is on peoples’ minds locally.

Liberal Democrats place a high emphasis on decisions happening as close as possible to the people they affect, so this is much more than lip service: it is about finding out where pressure from us can help, both now as candidates, and when we are elected. There are major local issues, such as re-opening the Ivanhoe line, ensuring the constituency gets benefit from HS2, regeneration for Coalville, the Bardon bypass and the community centre in Hugglescote, addressing new housing — these matter now in the campaign, but they matter because they are important to people, which goes well beyond an election campaign.

In Coalville it was great to work with Janet Pollard in Snibston North. Janet is standing for that ward in the District Council elections and will be a super and dedicated Councillor. Things got off to an encouraging start when the first person I spoke with said she was planning to vote LibDem, and both Janet and I were encouraged by warm receptions on the doorstep. Inevitably the first concern on people’s lips was around the impending closure of the Snibston Discovery Park — like them, all my instincts are that this is a mistake, and that the Discovery Park is also something that could be so much better, and should be improved rather than closed.

In Ashby the recurring theme was around the lack of community facilities, particularly in the newer areas, and frustration at the sense that developers are building housing but not contributing sufficiently to things like schools, doctors’ surgeries, community centres and places to go. That was voiced particularly strongly around the lack of facilities for teenagers.