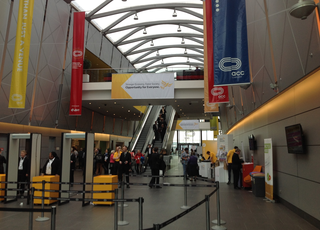 A quiet moment in security at the Conference

It’s a helpful merging of worlds to go from knocking on doors in North West Leicestershire straight to a party conference and feels like a way to raise local concerns at a national level.

On the doorsteps on Friday I was hearing people talk about their frustration at traffic on the A511 and the need for a bypass. I was also hearing people talk of their concern over plans to improve traffic flows at the Hugglescote crossroads, which include the partial or complete demolition of the Hugglescote Community’s Centre. On Saturday I was able to talk about this with Susan Kramer, Minister of State for Transport and explain that the two are related as people are avoiding congestion on the A511 by going via Hugglescote, so a bypass would save the community centre as well. At the local level, Liberal Democrat Councillor Michael Wyatt has worked hard to get a good contribution to the building costs form the developers of new housing, and I’ve picked up the national part of this — which is to try to persuade national government to waive the substantial license fee due to Network Rail for crossing the railway line.

I’d also been hearing about people’s desire for regeneration, specifically in Coalville, and more widely through the re-opening of the Ivanhoe Line. On Sunday morning I ran into MEP Catherine Bearder and was able to seek her advice about potential funding at the European level — people complain about money going to Brussels and forget that money also comes back to help with regeneration.

As the proposed route for the second stage of HS2 goes through the constituency, this was in my mind in the conversation. Nationally the case for HS2 seems overwhelming, though there is room for a conversation over the exact route, but this does leave me thinking about associated regeneration which can spread the benefits more widely. I find it helpful to think of regeneration in a European context, not least because that challenges me to think again of the places that tend to be neglected. 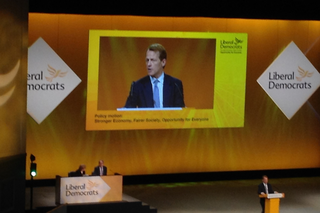 Saturday’s debate on policy, “Stronger Economy, Fairer Society, Opportunity for Everyone” showed tremendous diversity. The clue to its role is that policy in the Liberal Democrats tends to be made from the bottom up. There has been a lengthy process of consultation on what should go into our manifesto, co-ordinated by David Laws, and this debate took place in the closing stages of that process. The Federal Policy Committee will meet shortly after the budget and finalise the manifesto, taking into account the contents of this debate as well as the budget.

The international office organised a well-attended “fringe” debate on The rise of radical Islam on Saturday evening, addressed by Khadija El Morabit from Morocco and Sally Saya from Lebanon (who were both among the international visitors at the conference) and from the UK, Maajid Nawaz (PPC a for Kilburn) and Baroness Kishwer Falkner. It was good to have the international visitors, but I was particularly impressed by the depth of understanding of Maajid and Kishwer — both British Muslims and showing a rich understanding of the diversity and richness of Islam and its contribution to British society.

I’ll pick up in another article the situation on mental health, but was struck both by the depth of commitment, and the extent to which health minister Norman Lamb was courageously drawing on personal material. By excruciating “coincidence” his family situation was splashed across the newspapers at the weekend. At what must have been a really difficult time he showed great depth and dignity, and depth — and offered a poignant reminder of how deeply people are affected by this, including friends and family of the people who are ill. It is also encouraging that LibDem culture finds a way for that to inform policy-making in a way that is clearly about more than a crude calculation of what fits the PR image.

The leader’s speech is inevitably a rallying of supporters, but Nick Clegg’s performance was outstanding. He rightly championed our achievements in government, not least in the moderating of the Conservatives’ more brutal instincts. I was particularly struck by his comments on how the extremes are exerting a pull in politics at the moment, with UKIP pulling the Conservatives in a direction that could tear us out of Europe, and the SNP pulling at Labour in a way that could tear Scotland out of the UK, and leaving the LibDems holding the middle ground. His final rallying cry was that “this is a fight four our future, for the decent values of our country, a fight we must win.” — a good message to take back to the campaign.