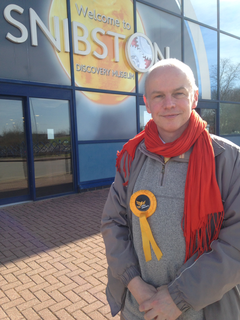 The decision to close the Snibston discovery park is still echoing around. I can appreciate the County Council’s desire to save money, but this feels like a short-sighted saving by a Conservative-led Leicestershire County Council riding rough-shod over the needs of an area where there are relatively few Tory votes to lose.

The obvious trajectory doesn’t look good. Coalville was hit hard by the closure of the mines, and closing the Snibston museum feels like a final attack on that heritage. But there is a bigger picture. Coalville is in need of regeneration. But regeneration is not just about buildings and grants. The building up of human interactions is key. Community facilities are vital.

Right now there is a question mark over the Hugglescote community centre, threatened with full or partial demolition for road widening. I’ve interevened with Transport Minister Susan Kramer to find a way for the Bardon Bypass to go ahead which would provide a much better way to relieve traffic problems at Hugglescote crossroads.

The closure of Snibston removes another community facility. Yet, although it is widely valued, Snibston Discovery Park also represents a missed opportunity. Lots of things are lacking, which means there is lots of room for improvement. Investing in that improvement would pay for itself in increased visitor numbers. On top of that, if improvements were done well, it would offer a great deal in terms of community development.

Re-visiting it recently, and mentally comparing it with museums which have held my attention and made me want to go back, I had a sense of what wasn’t there. I had an impression of staff being reigned in and could do more if given the freedom. The questions I came away with included:

So, where do we go from here?

What about investing in enhancing the museum instead of closing it? What about developing the cafe so that people naturally gather there? Railway tracks that once took the coal to away still run last the museum: what about having a “Snibston Discovery Park” station as a branch off the Ivanhoe line (which rather assumes common sense wins and that gets re-opened and extended).

Some of this will sound pie-in-the sky. It isn’t. A good museum/discovery park would draw visitors to Coalville. A good community arts outreach programme would contribute a great deal to the community.

Some of the benefits are clear and commercial — a better museum draws more visitors and can charge more. But there are ancillary benefits, from visitors coming to the museum and spending money elsewhere in Coalville, and from building capacity in the community. In this context, building capacity might be the most important as it helps those with no work or poorly-paid work recover the self-esteem and competence to seek better work. Those ancillary benefits don’t put money directly into the coffers of those running the museum, but they boost the local economy very well. Public funding would pay for itself by people and businesses earning more and therefore being able to pay more in tax.

Snibston feels like a half-missed opportunity. Closing it saves money in the short term, but adds to local deprivation and adds to costs in the long term. Investing in it will yield more. The closure feels like a dangerously-false economy. Surely it’s time to re-think that decision and make investment in Snibston part of a regeneration programme.