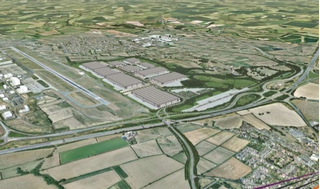 I’ve heard concerns from a number of people near Castle Donington about the proposed Strategic Rail Freight Interchange. This is a large development which will act as a link between road and rail freight. It is being likened to an inland port, and is part of a vision of more freight being moved by rail and transferred to road for the last stage of its journey. I was initially sceptical, but now see significant advantages in it and think the task in North West Leicestershire is to make sure it works for us.

I’ve considerable sympathy for people worried that this will be even more unsightly than the present M&S warehouses. There’s a promise that it will be sufficiently well screened to mean it is not visible — I see one of the key issues as ensuring that this promise is met.

The bigger vision of moving freight from road to rail makes considerable sense. In environmental terms it helps with CO2 emissions and reduces pressure on the road network which would otherwise need further investment there. This week the British Government lost a case in the Supreme Court over NO2 emissions, which adds to a broader case for reducing road haulage. In the background, one of the arguments for HS2 is that moving more passenger transport onto high speed rail links frees up capacity for freight to go by rail and eases pressure on roads. These interchanges are seen as boosts to the logistics industry and to employment — both important to long-term economic growth.

An added signidicance to the Castle Donington Strategic Rail Freight Interchange is that it is close to East Midlands Airport (where freight could be expanded), so it is linking air, road and rail freight. The importance of this both for logistics and for East Midlands Airport means it is hard to suggest an alternative location for this facility.

The Strategic Rail Freight Interchange proposed for Castle Donington is projected to create 7000 jobs. That is substantially more than the total level of unemployment in the area. If it is not to create pressure on housing and on traffic from people driving to work it will need good public transport links.

I hope that there will be a passenger station linked to the Strategic Rail Freight Interchange, so that people can travel by train to work there, from Nottingham and Derby to the north. It adds to the already-strong case for the Ivanhoe line from Leicester to Burton-on-Trent to be re-opened so that people from the Leicester and the southern part of the constituency can go by train to work there.

Provided that the development is well-screened, and that public transport is improved so that people can travel to work there, this could work well for us — but it is vital that both of these aspects are properly attended to. Like HS2, this is a development of national significance over which we have relatively little control, but we can push hard to ensure that we in North West Leicestershire share in the benefits of this.