Was the 2008 crash a result of America spending more than it could afford on fighting in Iraq and Afghanistan? Might Ukraine be a moment when Putin also faces some harsh realities? 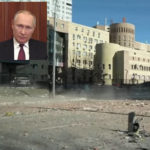 Journalism has been called “the first draft of history”. As the emerging story of Russia’s invasion of Ukraine unfolds, I’ve been thinking of this page of the “first draft”.

The 2008 financial crash began with problems in the sub-prime mortgage market in the US. One reading of this is that 9/11 shook the US to the core. Had it been in a stronger place, it might have been possible to seek a peaceful solution — borrowing language from the Truth and Reconciliation Commission in South Africa to ask about grievances in the Middle East against the US. IF that had been possible, it might also have unlocked the possibility of an enduring peace in Israel / Palestine.

Instead, it found in the US, a global superpower struggling to accept its decline, that needed a show of power in the “war on terror”. An assumption that the peoples of Iraq and Afghanistan would happily accept US-style democracy lead to an underestimating of the cost of this military intervention.
END_OF_DOCUMENT_TOKEN_TO_BE_REPLACED