The government has been claiming they are implementing “the will of the people” but as reality bites, how many will be saying “this is not what I voted for”? 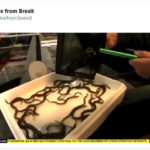 On 28 December, Sky News ran a story about Peter Wood, who runs a business exporting glass eels, and voted Leave, who now faces going out of business because of Brexit. He commented:

“be careful what you wish for. I thought we were going to get a global market. This was going to be a new opportunity. It hasn’t turned out like this. I would never have voted for Brexit if I knew we were going to lose our jobs”

There are many more stories of this sort on the horizon as we face disruption — to travel, insurance, exports and even the fishing industry realising it’s not getting what it hoped for.

In 2015 David Cameron would have been wiser to risk his government’s collapse than to head into a referendum where so much dis-information was likely (not least that pedalled by Boris Johnson in his time as a Brussels correspondent). He was under pressure because of the smallness of his majority — which would have put him in an even more difficult position than John Major in the 1990s. But wise leadership involves difficult decisions.

In 2016, Cameron would have been wise to hear the referendum result for the cry of pain it was, and not simply walk away.

Now we face a situation where there’s little chance of promises of Brexit turning into reality. People who voted for a bright future are discovering something else.

The UK should re-think this one before too much damage is done.

The immediate concern is damage to the economy. But Brexit is tearing at the fabric of the UK by pushing Scotland out, and threatening our democratic processes by leading the government in an authoritarian direction, and fuelling the frustration of Brexit supporters that the bright future is not arriving. If the government had the courage to say “We were wrong”, people would be able to cope — and move on.

Meanwhile, it looks as if just 17% of the UK population support Boris Johnson’s deal: hardly a ringing endorsement…